General: An active, graceful, well-balanced dog, very gay and free in action; fearless and sporting in character, yet at the same time gentle and affectionate.

Head: The skull is slightly rounded, but without a dome or peak; it should appear flat because of the high placement of the ears.

Eyes: Large, round and set well apart; color a warm, very dark brown, giving a lustrous, limpid look. There should be slight cushioning under the eyes, which contributes much to the sweet, gentle expression characteristic of the breed. Faults: Small, almond-shaped, prominent, or light eyes; white surrounding the ring.

Nose: There should be a shallow stop, and the length from base of stop to tip of nose should be at least 1-1/2 inches. Nostrils should be well developed and the pigment uniformly black. Putty, or “dudley” noses, and white patches on the nose are serious faults, as are small, pinched nostrils.

Teeth: Strong and even, preferably meeting in a scissors bite, although a level bite is permitted. Undershot mouths are greatly to be discouraged; it should be emphasized, however, that a slightly undershot bite in an otherwise well-balanced head with the correct sweet expression should not be penalized in favor of a level mouth with a plain or hard expression. Faults: weak or crooked teeth; crooked jaws.

Ears: Set high, but not close, on top of the head. Leather long, with plenty of silky feathering, and wide enough so that when the dog is alert, the ears fan slightly forward to frame the face.

Shoulders: Sloping back gently with moderate angulation, to give the characteristic look of top class and presence

Body: Short-coupled with ribs well sprung but not barrelled. Chest moderately deep, leaving ample heart room. Back level, leading into strong, muscular hind quarters. Slightly less body at the flank than at the last rib, but with no tucked-up appearance.

Tail: Set so as to be carried level with the back. Tail should be in constant characteristic motion when dog is in action.

Coat: Long and silky and very soft to the touch; free from curl, though a slight wave is permissible. Feathering on ears, legs and tail should be long, and the feathering on the feet is a feature of the breed.
Trimming: NO trimming of the dog is permitted. However, it is permissible, and often desirable, to remove the hair growing between the pads on the underside of the foot.

Size: Height 12 to 13 inches at the withers; weight, proportionate to height, between 13 and 18 pounds. These are ideal heights and weights; slight variations are permissible, and a dog should be penalized only in comparison with one of equal general appearance, type and quality. The weedy specimen is as much to be penalized as the oversized one.

Colors: The following colors are the only ones acceptable:

Blenheim: Rich chestnut markings well broken up on a pearly white ground. The ears must be red and the color evenly spaced on the head, with a wide white blaze between the ears, in the center of which is the much valued lozenge (diamond), or “Blenheim Spot”. The lozenge is a unique and highly desirable, though not essential, characteristic of the Blenheim.

Tricolor: Jet black markings well-broken up on a pearly white ground; with rich tan markings over the eyes, on cheeks, inside ears and on underside of tail.

Black-and-Tan: Jet black with rich tan markings over the eyes, on cheeks, inside ears, on chest, legs, and underside of tail

It is important to remember that a dog can have one or more of the faults listed in the Standard, in moderation, and still be an over-all typical, gay elegant Cavalier. On the other hand, bad temper or meanness are not to be tolerated and shall be considered disqualifying faults. It is the typical gay temperament, combined with true elegance and “royal” appearance, which are of paramount importance in the breed. 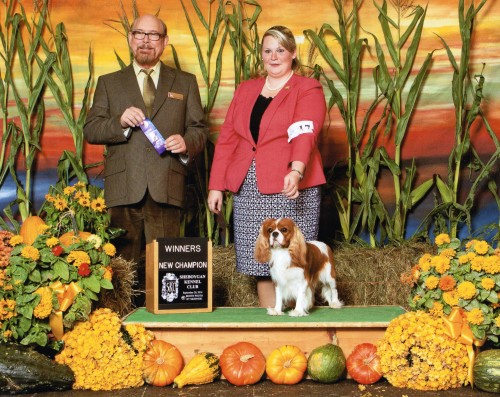 This is our boy “Bogart” as he got his AKC championship. He went on to receive his Grand Championship title as well. Thanks to his wonderful breeder Mrs. Stella Spradley and his great handler Miss Tiffany Knox.